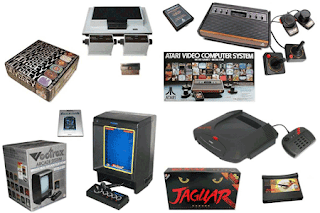 I've talked about it, I've been working on it for a month. Now it is finally here my report on the sales of video game consoles. Before we get started I'd like to explain a little bit about what research was done and how. All the stats that you see are based on the Video Game>Systems category on eBay. Wholesale lots weren't included because many times the sales price reflects the value of added games and not the consoles themselves. To determine the price of the console alone I narrowed down the category. Results were obtained from daily samples of eBay's RSS feeds which actually wasn't that hard with a little programming. The intro pic was taken from A Pictorial History Of Games.
Modern Gaming Consoles
Let's get started by looking at the big three right now: Wii, PS3, and Xbox 360. Some of the results might surprise you. Take a look at the average sale price for each system:


As you can see the PS3 is far and away the winner on price with Xbox 360 taking up second place. This could be misleading though due to an abundance of "AS IS" Xbox 360s still being sold. It looks like people have been buying a lot of Xbox 360s with the dreaded RROD and stripping them down to just the console and selling them "AS IS". The big loser is the Wii probably because they sold so many units and frankly I think some people are just getting bored with the whole idea. Plus, they are the cheapest of the three to buy retail. Next let's look at the sale through rate:

Here the Wii under performs as well showing their are a lot of unsold Wii consoles unlike the PS3 or even the Xbox 360 which is the oldest of the modern consoles. Look also at the competition that is the amount of other listings on eBay:

Notice that if you plan on selling Wii consoles then you'll have a lot of company and that's not a good thing. With the massive amount of competing listings it will be hard to get your console to stand out from the pack. If you look at the PS3 though there is relatively little competition, a high sale through rate and the best average price. It's definitely the best choice among the modern consoles.
Nintendo Video Game Consoles
Nintendo has always been a leader in gaming so let's see how their past consoles have been doing on eBay. First let's look at the average price for each:
All the older Nintendo brand consoles are still getting pretty good prices on eBay. However, it should be noted that many times the consoles that sell are those with extra accessories or ones that are in good condition. So these factors have to be taken into consideration when looking for classic consoles. The Nintendo NES seems to do particularly well, check out the sale through rates:

These are really good sale through rates considering that these are older classic consoles only the GameCube is a little low. This could be due to the amount of "as is" consoles being listed on eBay. It could also be due the fact that GameCube games are compatible with the Wii as well. Backwards compatible consoles hurt the sales of older consoles. Why buy a PS1 when you can play all the same games on a PS2? Obviously sales of the PS1 are going to lag behind. Anyway on to competing listings:
It would seem that the N64 is the console with the least amount of competition. When you compare the numbers with those for newer consoles all of them are pretty good choices and pretty easy to find for resell.

Sega Brand Consoles
Sega is also a brand that although no longer exists still pulls it weight with video game collectors. The average prices:
It should come as no surprise that the Sega brand consoles are still selling quite well. The Sega Saturn is very hard to find in working condition. The 32X is not really a console but a add on device for the Sega Genesis. While it's not hard to find one it is hard to find a complete one with all the hookups needed to play.  The Sega Genesis came in two models the first being more durable and having external volume control and headphone jack. The second model has problems with the power connection becoming loose and is less popular. Have a look at the sale through rates:
All the Sega Consoles have a pretty good sell through rate although probably not as desired by buyers as the Nintendo consoles they still have a good following. What's surprising is the amount of competition:
Unlike the Nintendo consoles quite a few of the Sega consoles could be considered real collectibles with very little competing listings. The Sega Master and 32X are real collectibles, the Saturn had more listings but if you look most of these are for non-working systems. Finding one in good condition is very rare.

*This is just part one of my three part report there are a lot more consoles to look at including: Atari Consoles, Rare Consoles, and Misc. Consoles. Plus, the top ten in terms of Average Price, Sale Through Rate, and Least Competition. This research was conducted on a small scale using random samples and is limited in what it can tell you about specific listings. To learn what else is possible read our article on Ebay Market Research. And don't forget to follow us or better yet subscribe to our newsletter using the sign up form on the right. That way you'll be sure to receive our reports each month. Next month's report will be on Video Games for Consoles. So stay tuned.*
Tags
Market Research Strategies
Reactions