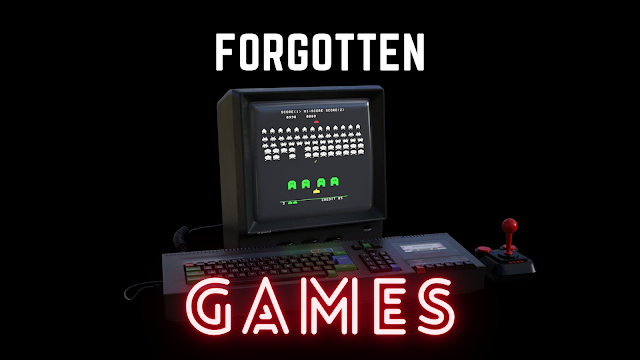 As an Amazon Associate I earn money from qualified purchases made through links and advertising on my site, learn more.

In the late eighties, every kid wanted one game console: the Nintendo NES. Our family though didn't have the money for such frivolities. My dad decided on something else: a personal computer that could be used for entertainment but also education. Released in 1981, my dad picked up many of them and began a personal hobby of sorts. Although, the technology world had moved on to other things he had decided he could do everything with the TI-99/4A and it's many accessories. He even joined a group of TI-99/4A enthusiasts who shared ideas on how to get the most from the technology. Nowadays when someone thinks of TI or Texas instruments what will likely come to mind are graphing calculators. However, in those days TI had made a big push for the home computer market. The machine was ahead of it's time, here are just a few of things you could use TI-99/4A to do:

I won't say these are the definitive "best" games, the "top" games, or the most advanced games. These are just the games I remember playing as a kid on my old 13 inch CRT television. They are presented in no particular order.

Parsec. Probably the game I played the most as a kid. It is a pretty straight forward side scrolling space shooter game. Good use of color and graphics for the era. I remember that I would almost always die trying to refuel. You had to be very precise or you would crash into the ground. A simple game but very addictive. There were also a few hidden secrets, not that I knew about those as a kid. 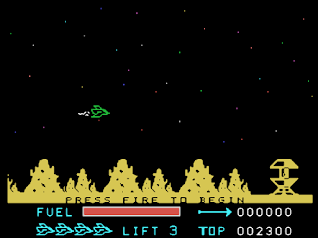 Screenshot from Parsec for the TI-99/4A

Moon Patrol. Another space shooter, except in this one you control a space rover of sorts and must jump craters while shooting the bad guys. This game was much easier than Parsec, the major issue being timing your jumps correctly. If you jump too soon you fall in the crater and die.

Jungle Hunt.The TI-99/4A didn't have Pitfall but it did have a similar game called Jungle Hunt where you would jump boulders, swing over alligator pits and rescue a woman from natives who wanted to boil her for some odd reason (video games were not very PC back then I guess). This game was originally titled "Jungle King" and the main character resembled Tarzan, due to copyright entanglements it was later changed to a generic safari adventurer. 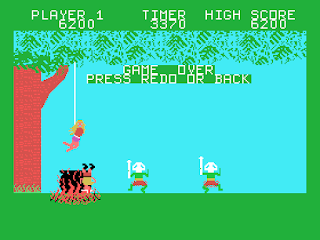 The Adventure Cartridge. This wasn't really a game but the cartridge that allowed you to play multiple text based adventure games. We had many of these on floppy disks, not that I was very good at them. I didn't have the patience to go through the steps one by one. I remember the beginning of one game: you are in a dark room, available items match and torch. If you didn't light the torch correctly you froze to death. If you know what game this was you can put in the comments below.

Tunnels of Doom. One of the first RPGs this game also tried it's hand at 3-D graphics. Your party explored a 3-D dungeon with various rooms that would have to be cleared of monsters. Along the way you would find treasures, weapons, maps, and build your characters. This game paved the way for many other classic turn based RPGs.

TI Invaders. TI Invaders was a direct clone of Space Invaders, although a few tweaks were made to make sure it wasn't a complete, it was basically the same game. I enjoyed this game as a kid but would get bored with it when there when I couldn't beat my high score. 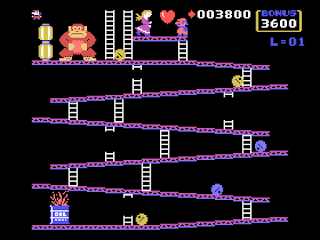 Screenshot of Donkey Kong for the TI-99/4

Donkey Kong.People often forget that Nintendo started out as a arcade company and only made the jump to home consoles some years later with the Nintendo Entertainment System.Their star mascot then makes his first appearance on ported versions of their first US arcade hit: Donkey Kong. This game appeared on multiple consoles and I think the TI-99 version holds up pretty well to all of them. The game also led to some well recieved sequels for the Super Nintendo and N64. 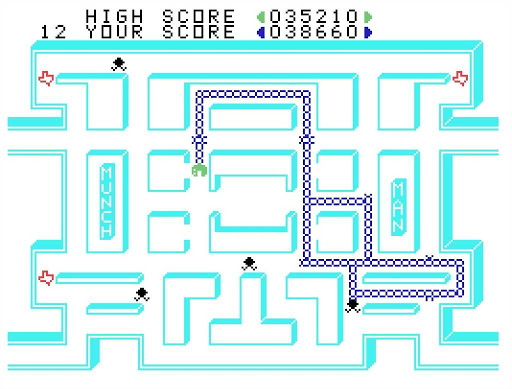 The Pac-Man clone MunchMan for TI-99/4A

Pac-man, Ms. Pac Man, and Munch Man. I put these together because in my mind they are pretty much the same game with some slight variations. Munch Man had a few more enemy sprites but the gameplay remained unchanged. I remember disliking the sluggish controls on MunchMan as I would always get stuck in corner and die. Pac-man was more responisve and generally more fun to play.

Alpiner. In this odd game the goal is to climb to the top of the mountain. In order to do so you must avoid obstacles stationary and moving like snakes, falling rocks, and bears. By moving horizontally and changing speed you can avoid the obstacles and make it to the top of Mount Everest. Sounds simplistic but I really enjoyed it as a kid.

Trade Wars. This was the first online game that I ever remember playing. It ran on the BBS system of my dad's TI-99/4A group. Once dialed in you could enter this turn based strategy game and play against other BBS users. The game was loosely based off of Star Trek, the idea being that could warp between different space sectors trading items. You could also choose to be evil and destroy ports and steal. When your series of turns was done for the day your ship would stay in whatver sector you were in. You would often log on and find that someone destroyed your ship, very frustrating. Playing as a hero was probably the better choice as it meant it was less likely someone would destroy your ship but most of the time I couldn't resist attempting to steal from the ports. 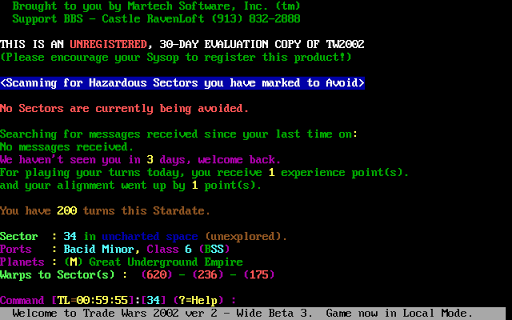 Defender. Similar to Parsec in many ways but this game had a different objective. Instead of just mindlessy shooting aliens you had to protect the humans from danger. The aliens would be trying to pick up humans off the grounds and take off with them. If they got one you would have to shoot the alien and rescue the human. If too many humans died that would be game over. You could also be silly and just shoot the humans for fun.

Any games we missed? What were your favorite TI-994/A games? Let us know in the comments below.

If your looking to start collecting or purchasing TI-994/A games and systems a good place to start is pricecharting.com they keep upto date with real time prices on Amazon and eBay, which should help you make good purchases. If you're not looking to purchase but still would like to play some of these classic games I recommend downloading a good emulator and some ROMs. I have zipped up a few ROMs and a good emulator for Windows 10.